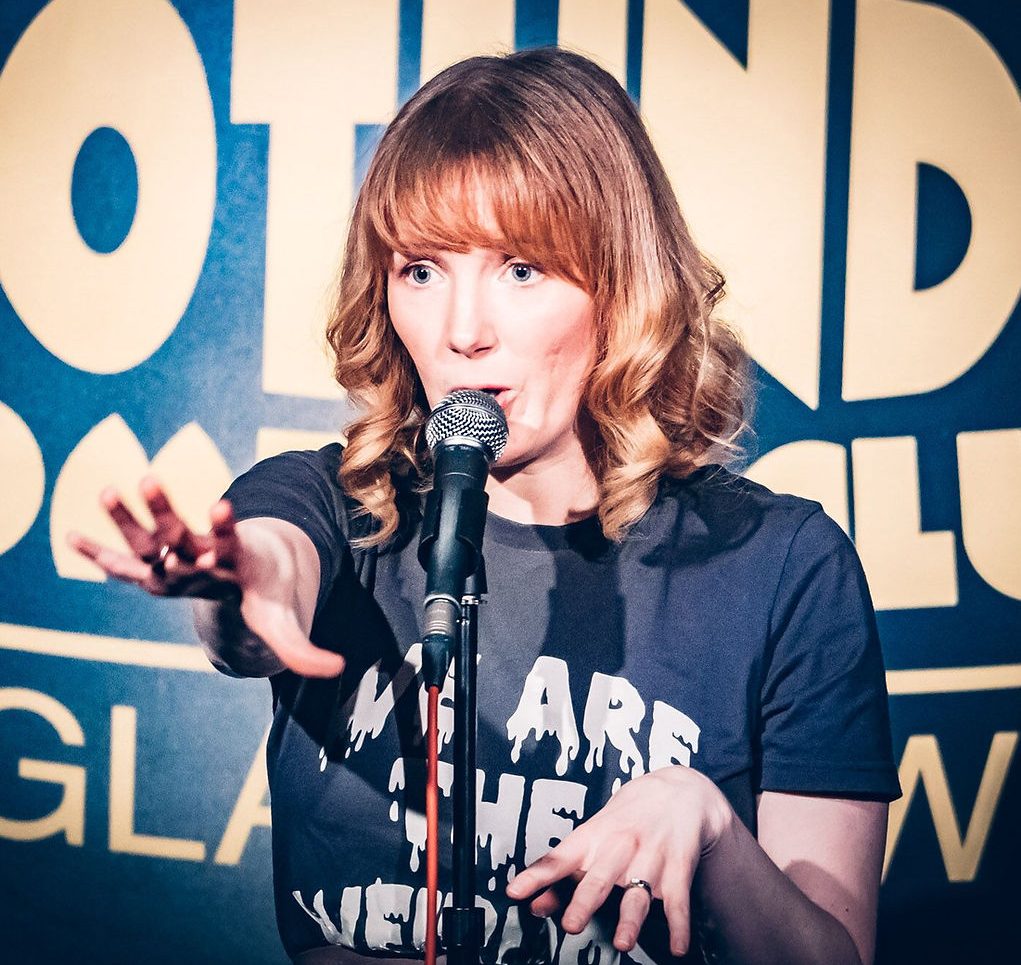 Sought after for her on point satirical views Jay Lafferty has become a regular face on BBC Scotland’s television channel. It was a performance on BBC’s Breaking The News that saw Lafferty hit the front page of The New York Times for her on point description of Theresa May’s catastrophic handling of the Brexit deal. Her Edinburgh Fringe 2019 hit solo show Jay Lafferty: Jammy was made into a BBC Radio Scotland three part series – Jay’s Jammy. During the pandemic alongside the rest of the world Jay took her work online performing comedy all over the world from the comfort of her living room while continuing to be a regular voice on BBC Breaking The News. In the new normal she was one of the few comics who performed a full Edinburgh Fringe run in 2021 with Jay Lafferty: Blether.

Jay has been performing comedy since 2005 working all over the UK as well as performing in New York, Los Angeles, Toronto, Reykjavik and Amsterdam. An experienced compere and stand-up Jay has an easy manner on stage, instantly connecting with her audience – whether a rowdy group of stags and hens or a serene ladies luncheon.

Jay’s friendly and relaxed persona allows her to get a way with the darker jokes that punctuate her material. Her comedy has been described as chocolate covered hand grenades. Don’t be mistaken Jay’s personality can melt butter – sometimes by using a flamethrower. Clever material delivered with effortless charm and packing a bite every bit as bad as its bark.

An experienced writer and performer Jay has worked on a number of hit BBC Scotland and BBC Four radio shows and one of the longest running panelist on Radio Scotland’s Breaking The News. Jay also secured a small part on Season 2 of The Comedy Unit’s hit BBC1 show Scot Squad.

Jay’s Debut Full Fringe Run solo show, Besom (2017) ranked Number 5 in the Top 10 best reviewed comedy shows at the Edinburgh Fringe 2017. In 2019 Jay was crowned Best Compere at the Scottish Comedy Awards and in 2022 Jay was nominated for Best Compere in the Chortle Comedy Awards.

⭐⭐⭐⭐⭐ ‘Engages her audience with such playfulness and genuine curiosity we have no choice but to cling to her every word.’ – EdFest Magazine

⭐⭐⭐⭐⭐‘Blether is a masterclass in stand-up comedy and Jay Lafferty has set the bar incredibly high for other comics of the Fringe.’ – Broadway Baby (for Blether 2021)

‘Cuddly one sec, cruel the next, this comic will have you open-mouthed in amazement’ – The List

‘Jay is oh so good at chatting with the crowd, finding out information and using it to great comedic effect, laughs a plenty.’ – One4Review

‘A stand-up with a future getting ever rosier’ – Brian Donaldson

‘A strong and entertaining hour’ (Praise for Jay Lafferty Wheesht!) – The Skinny